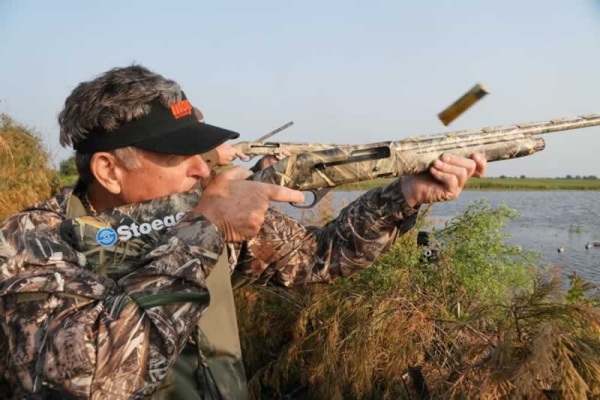 Terry Denmon is an American Professional Engineer, Businessman, Entrepreneur, Philanthropist and Professional Hunter. Growing up in the vast Mississippi River Delta, in Louisiana, the State known as Sportsman’s Paradise, meant hunting was a part of everyday life. Having a father that raised and trained bird dogs, hunting extensively with them, learning to hunt came at a very early age, kindling a lifelong love for the outdoors.

Terry earned a BS in Civil Engineering from Louisiana Tech University and after several years of government service as an engineer, founded his first engineering company in Monroe, the trade center for Northeast Louisiana. The engineering profession afforded the opportunity to pursue an infatuation held since youth for western big game ranging from Mexico, Canada, and north to Alaska. Success afield spawned a desire to help others, so he spent many years guiding fellow hunters for antelope, mule deer and other game.

All the while partaking in big game adventures, Terry partnered with lifelong friends, the Crowe family, owning a commercial waterfowl operation in close proximity to the famous Catahoula Lake complex in Louisiana where he continued to outfit and guide hunters in this waterfowl rich environment. His hunting adventures have taken him around the world, including 7 trips to Africa.

During the Louisiana duck season of 1999, his life changed forever when he agreed to assist his friend Murry Crowe in designing a spinning wing duck decoy, which Murry had agreed to manufacture for a third friend, Jeff Simmons, who owned a large sporting goods store in the area. Murry, renown for his mechanical aptitude, was ideally suited for manufacturing the decoys, but needed Terry’s technical help.

The concept of the spinning wing decoy (SWD) had begun to emerge in duck hunting in the late 1990's due to its ability to attract ducks, especially from great distances. A few were attempting to produce and market decoys based on the concept but were plagued by poor design and construction, and most efforts were stifled with marketing issues. After careful assessment of existing designs, he and Murry envisioned a 'better mousetrap' and as they say "the rest is history!" A culmination of engineering, mechanics, and marketing savvy gave birth to the MOJO Mallard, revolutionizing the duck hunting industry like magic! Louisiana being steeped in Voodoo folklore, where the term “MOJO” means “Magic” ... henceforth, a magic mallard! Both Terry and duck hunting were changed forever.

In early 2000, Terry, Murry and Jeff formed HuntWise, Inc. and began the business of manufacturing, selling and promoting their new product. By 2007 they had expanded their product line into other decoys and hunting accessories and established MOJO as the premiere brand for motion decoys. That year, Terry acquired controlling interest in the company. In 2012 Terry acquired all remaining interest in MOJO. Today, the company has a greatly expanded product line establishing the “MOJO” Brand as dominant in motion decoys and is known as the company that “changes how we hunt” by bringing truly innovative products to hunters worldwide.

Along the way, Terry expanded his engineering businesses, participated in farming, real estate investments, served a constitutionally limited 6-year term on the Louisiana Wildlife & Fisheries Commission, serving as Chairman for 2 years and as Vice-Chairman for 2 years, served as Chairman of the local Chamber of Commerce, and formed his own charity to help local needy children, styled “Caring for Kids”. In 2014, Terry was inducted into the Legends of the Outdoors Hall of Fame. At the time there was less than 100 persons inducted from around the world. He currently serves as a member of the Louisiana Committee of 100, an organization of the top 100 CEO’s and Presidents of the Institutions of Higher Learning working to better the State.

Currently, Terry divides his time between his engineering interests, MOJO, family investments, civic and charitable causes, all the while traveling the world hunting and hosting MOJO TV. MOJO TV just entered its 15th consecutive year on Outdoor TV. Additionally, Terry is regularly invited as guest on other TV Shows, a contributor to radio and print interviews, podcasts and other outdoor media.

He also enjoys new product development that aids fellow hunters to become more successful and to watch it grow in the marketplace, and he intends to continue that for the rest of his life.

Read 4259 times
Published in About MOJO Outdoors
back to top