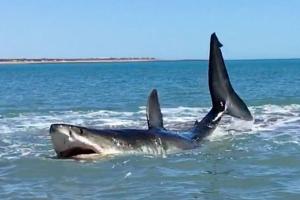 Dale Pearson, resident of Puertecitos in Baja California, Mexico, spotted what appeared to be a stranded hammerhead shark or beached whale in shallow waters.  He decided to take a closer look, but to much of his surprise, he waded out to come face to face with a Great White Shark.

Pearson filmed the 15 feet long shark with his camera phone as it thrashed around in 3 feet of water. Warning: Graphic Language (viewer) discretion advised.

According to the video, this Great White Shark was most likely in shallow water to hunt stingrays, and appears to be injured by a boat propeller of some kind. In the video, the shark appears to have a large wound near the dorsal fin.  However, Pearson states the shark was not mortally wounded and swam away just 30 minutes later.  In addition, this shark has been spotted several times thereafter several days apart. 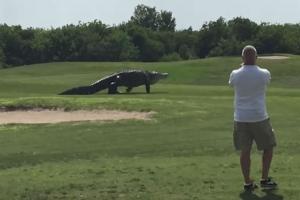 Looks like Godzilla wanted to get a couple holes in before lunch. This giant alligator may very well be one of the largest ever documented. However, it will be hard to beat the Florida state record, which is currently holding at 14 feet, 3 1/2 inches from Lake Washington, according to the Florida Fish and Wildlife Conservation Committee.

Even though it may not beat the record, we are willing to be golfers and local authorities would prefer that he stay clear of local golf courses. 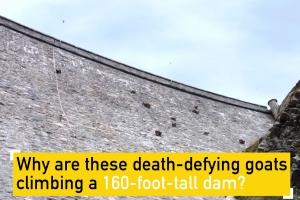 Why are these death-defying goats climbing this 160-foot-tall, near vertical dam?  Better question is How are they defying gravity?  Check it out in the National Geographic footage below:

Thanks to their specially designed split hooves and rubber-like soles, the Alpine Ibex is able to climb near vertical surfaces with ease to lick the side of this dam.

You might be wondering why they would go to these heights just to lick a rock.  However, the dam's salt-crusted stones provide essential nutrients that the herbivorous mammals need.

How to Cook Crockpot Wild Turkey 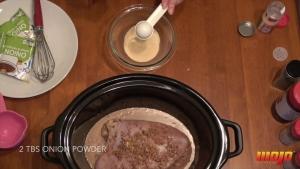 Wondering what to do with your Spring harvest? Here is a simple crockpot method for cooking the most delicious and mouth watering wild turkey you've ever put in your mouth!

Blowing Peeps up with Explosives!

We've all melted them in the microwave, but what exactly happens to a Peep in an explosion?

Here to help solve this mystery is expert markswoman, Kirsten Joy Weiss.  Watch this dazzling display of melted sugar and color in slow motion, as she shoots 1000 Peeps with a SCAR-17:

If you enjoyed this video, go ahead and share it with your "Peeps!"  From everyone here at MOJO, we hope you have a safe and happy Easter!

Rapper gets jumped by a deer 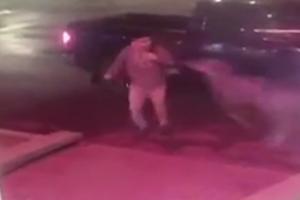 Shocking surveillance footage shows unsuspecting man being bulldozed by a deer in British Columbia. I audibly laughed way too hard when I first saw this.

While it's unclear why or how this exactly happened, both the man and the deer appear unharmed.

Runners Hit by Herd of Deer during race! 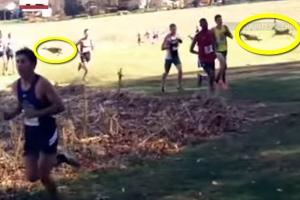 Exercising gone wrong!  This group of runners is blindsided by a HERD of deer in the middle of a race at DeSales University in Pennsylvania.  You have to see to it believe it:

Wonder what they were running from?  Let us know below in the comments section! 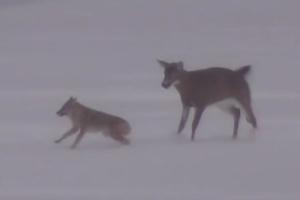 What happens when you mess with a porcupine?  The answer may seem obvious to you, but this boa constrictor is for a rude awakening...

While it's unclear at to what transpired prior to this video, it appears this snake chose the wrong thing to eat for lunch.  I doubt the snake even got the chance to attempt to swallow his prey, but that is probably for the best.  As the snake wrapped his coils around to suffocate his prey, the porcupines spines were released, and the increased pressure pushed them further into the predator.  He may have a hard time eating solid food for a while.

Published in Viral Videos
Tagged under
Be the first to comment!
Read more...
Page 1 of 5
Join the MOJO Family